THIS IS THE STORY OF TOUR & IS
THE CONTENTS OF MY HEAD AND HEART
I JUST HAVE NOT BEEN ABLE TO UPLOAD SOME VIDEOS or PICTURES
SO DO CHECK BACK-MEANWHILE :

I slept well. I was up maybe 06:00am. I had missed typing up my time on Armagh (nearly two weeks ago now) and I was determined to finish that off. By 8:00am it was all done. I had finally caught up with myself on the typing. The video uploads were still a disaster however, only 60% had been uploaded so far and really, the rest would not get done until I was back in the office with my fibre optic connection. I breakfasted then returned to my room. Bradford was only about 20 minutes away and I wanted to make full u 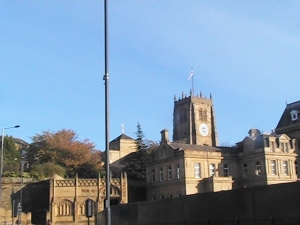 se of the quiet and the Wi Fi connection to make some people connections.

It was time to go and I made my way the short distance into Bradford. It was pleasant drive and a very pleasant day and Bradford is a city nestling in am an ice-cream scooped out valley bowl.

I arrived at the Cathedral around 11:00am and the Canon made me Coffee and gave me two chocolate biscuits. One had toffee inside. The Anglicans know how to live it up . I have to tell you, despite no Cathedral recognising my ordination or daring to call me Rev. I am MIGHTILY impressed with their accommodation and openness. I keep saying this I know, but it’s the truth, large or small, these Cathedrals are places of refuge, sanctuary and help. I have to say that I fully understand the massive amounts of money needed to upkeep them, but I don’t believe in charging to get in. This demines the ministry and for sure, there will be other ways to raise the dosh.

I wanted to leave the Cathedral and get along to CAP who by now were waiting for my call. Interestingly, CAP was adjacent to the Cathedral! But it wasn’t happening, for an interesting gentleman had followed me in. He was a Christian who believed he was sent to Bradford to meet with me. Why not.

Frankly, we had a good time together and prayer for each other, though, and I know the brother won’t mind me saying, it was an interesting experience! I suppose you might say, he had ‘the jerks’. Like I say, I am absolutely not mocking, and this man really did love Jesus. No doubt about it and you know, he was scarily sold out to Him. We prayed for each other there in the Cathedral whichw as just lovely.

It was nearly 12:30 and as I was leaving the one of the Verger’s met me and informed me that the lady from CAP came into the Cathedral to see me and left me a message that she would be in Daisy’s Café.

Daisy’s Café was part of the ‘Kala Sangam’, a leading South Asian arts organisation adjacent to the Cathedral in a building that they once owned but which turned into a financial folly and had to be sold. Been there. Done that. I asked the Verger how I would recognise the lady? “She’s wearing a long jumper and is with a very tall bloke.” Sure enough Deb was wearing a long jumper and the tall bloke was her husband Dave. They bought me Lasagne and I joined them for lunch. How cool is that. It turns out that Dave’s Dad is the Bishop of Birmingham and he is seeing him tonight. That was even cooler! Maybe I could get a hook up.

I joined Dave and Deb back at Jubilee Mills to receive a tour of the CAP organisation.
There are maybe 200 people working at CAP and they are handling over 70 Million pounds worth of debt. They are growing at a phenomenal rate and their vision is beyond fantastic. I think they client base is going to explode as this global financial crisis continues. I can tell you that I was truly humbled to see their very caring operation. Just amazing. So, if you have any financial problems, then please contact Christian’s Against Poverty, a most superb organisation.
OK, so now it was off in to town to see what God wanted me to do. As yet I had nowhere to speak or to sleep. It was a beautiful day and you know, some open air preaching was on the horizon. I hate it!

Anyhoo, I thought I would hunt down the Christian Bookshop and find out where the best place to preach in the open air might be, do some interviews and maybe find a place indoors to speak. Hopefully. After all it was getting late. Still the sun continued to shine and you know, the city centre was still busy.

The bookshop was really a cover for a place of prayer. Indeed, it financed the place of prayer. ‘Healing on the Streets’ met their each week for prayer before going out and the lovely ladies pointed out a small square just down the road from them which was a good spot for a preach. One of the ladies tried so hard to find me a church to speak in and was telephoning and texting all the time. In the end she hooked me up with a Youth Worker who was going to do some ‘Free Running’ with some kids that evening. But after all her efforts, it wasn’t possible for me to join them but how wonderful that Christians are engaging on all levels. ‘Free Running’ Ha! I am finding it a problem getting up when I bend down!

I went down to the square. Yes it looked a possibility and it just so happened there was a Salesmen there who had somehow got his car into the area. I needed to bring my PA and sign and that meant the car had to come. It was just too far to drag it. So asked him how he got his motor down there and he kindly gave me an interview as well. Allow me to introduce you to Lord Naz!

Across the road from the small square is the Vast Council offices of Bradford with an enormous open square. There is a tent of protestors occupying it. They look like a fly in an exceptionally large pot of Germaline. The protest here is a little ‘lack lustre’. Anyhoo, I wander over to the Civic centre and get the number for the Police and the people that control vehicular access to the small square. I get the numbers from a nice bloke on reception and walk back to the car. Can you Adam and Eve it, I lost the piece of paper? What! So, anyways I would go get the car, and if the Police came and questioned me about the use of the PA I would plead ignorance.

So anyways, I walked back to get the car and up the Cathedral steps past two sets of young Asian teenagers groping each other. Teenagers! They never change. I bump into a geezer and start talking about the niceness of the day. This man has been on the dole for seven years. He tells me that the country is just catching up with the recession that has been Bradford for years. He has been treated for depression but now won’t take the drugs. He is just living one day at a time.” What could I pray for?”

“A job – not too much money, just enough to live. Its not a lot to ask for.” No it isn’t.
Oh and as a side issue, apparently, “the heroin in Bradford is a far better quality than that muck down South?” I didn’t know that.

I plug the Video Camera for a recharge and bring the car over to the small square. I manage to find a parking space around the corner. This is a miracle.

The light however has gone from the small square by now and I am drawn over to the very large square across the way which is still sunlit and has the amazing backdrop of the Civic Centre.

I ask some interesting folks over there if they want to be on Youtube. They do.
I hire a young woman to be the Camera lady (£5) set the scene up, give her a bit of training and then go for it. Actually there is about 50 people I am speaking to and on my right the interesting group are eager to get involved.

John and the wee group are mostly foreign to these Isles. One of them is the agent that carried the Aids virus from Israel and distributed it into Africa. He spends most of his time now, dobbing in his former secret agent mates.

Now today, I have three very different and separate interesting incidents today and my next comments have no connection to them whatsoever, however, I have noticed that madness seeks its own company, and that demons hang out together. Like attracts like. So look around. Who are you hanging with?

I left John sorting out plans in making his own NGO ref recovery from Diabetes and high blood pressure. Good on him!

I got back to the car and plugged in the Post Code to my Hotel. That’s right, I forgot to tell you that whilst collecting the car from the Cathedral I rang and asked Bridget to sort me out with a hotel near Manchester. She got me a number and I rang and negotiated a room and Breakfast for £29.00. C’Mon!

The drive took about an hour. The road was bad busy. When I arrived at the massive hotel, the room I was directed to was directly adjacent to the Motorway. No. I needed to sleep and this was mental noisy. They changed my room and in the end I got one with two double beds. Tesco’s was a 5 Minute walk away and I had run out o Ritz crackers for my peanut butter jar and so I headed on down there and got some fresh fruit and water to go with the crackers. Sorted
It was 8:00pm by the time I sat down to type. My Face book has got message from Pastor Jarrod Cooper in Hull “Glad it all worked well for you in Hull. Alison, Steve, Phil.. All lovely ppl. Thanks for blessing our city! “ That was nice.

The Wi Fi upload is so pathetic here though that I don’t think ‘it’s’ going to happen tonight. I ring Bridget. Our Cat Bobo is sick.
Sigh….

It’s 11:00pm and tomorrow is my 49th City and I am in Manchester, speaking from Ephesians and joining with a couple of dozen Christians on the streets in a special outreach service. I am really NOT an outdoor preacher! Give me a coward’s castle any day of the week! Even so, I wonder what God was going to do tomorrow?

Hi there | we are in still in need of cash to finish this tour | We would love you to help | You can give ANY amount and you don’t need a paypal account either| Give right now and right here to: The Breakout Trust/66 Cities | Thanks in advance | DONATE

If You Want to see The First Twelve of Our 66 Minute Video Bible Check Here P.S. We need some more funding ti finish this project before Christmas so if you are up for it give me a call on 07975 805 323

Biblical activist
View all posts by vrfarrell →
This entry was posted in 48 of 66 | BRADFORD. Bookmark the permalink.