THIS IS THE STORY OF TOUR & IS
THE CONTENTS OF MY HEAD AND HEART
I JUST HAVE NOT BEEN ABLE TO UPLOAD SOME VIDEOS or PICTURES
SO DO CHECK BACK-MEANWHILE :
Did I tell you that I managed to get this room for three nights? That’s right three nights with Breakfast for £87.50. It’s a great deal. It feels like a bit of a safe house. I can maybe rest up a little here. It will be good to come back to just one place.

The Hotel I am in, describes itself as the ‘Airport Hotel’, servicing Manchester City Airport. Certainly, it is packed, though at the moment it seems mostly with coach tours for the over 70’s. As long as they leave me some breakfast I don’t mind.

I was up around 5:30am and finished off uploading the blog and general portable office work. I breakfasted around 8:00am…it was OK……scrambled egg? You can’t have a proper full English without fried egg. Scrambled rubbish is the lazy way to do a breakfast.

My appointment with Pastor Emmanuel was at 12:00 at his home. It was only 15 minutes down the road and I arrived on time. This Nigerian Assemblies of God Pastor and his wife ‘Shade’ are both PHD holders but have for some years now fully dedicated themselves to caring for the people of their church. They have a vision from God and are going for it! Lawrence, a member of the church and another PHD student (this time from Ghana I believe) joined us for prayer before we went out to Piccadilly Gardens Manchester. If you look at the Garden from the Tram Station, we were positioned ourselves at the extreme left before the tram lines. 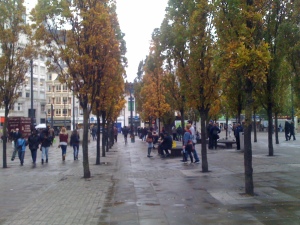 We went in two cars, parked them around the corner from where we would be preaching, got our stuff out and trundled up the road. The Pastor had a bigger version of my own PA system. Stereophonic proclamation. Excellent!
We trundled past a couple of ladies wanting to do research on Christmas cards and the like. “Nope darling, sorry, I don’t have the time”. In cities, we are all either buying or selling. I was selling Salvation. The cost was both nothing and everything you are, have and ever will be. We should have had a ‘Securicore’ escort.

There were about ten of us in total. The Pastor had brought some information about his church, 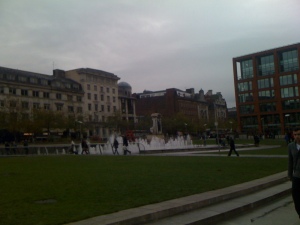 ‘Calvary International Church,’ and we began just to engage and hand them out. It had been raining most of the morning and it felt a little cold. But at least it was dry and you know, it would remain dry for the next two hours we were there.

I wandered around the massive square, the trams, the fountains, the moving masses. I needed a hook. An attention getter.

I went back to the car and got the bottle of Vampire blood I had bought for Swansea. I knew it would come in handy.

Getting back to the square, I had one of my black brothers smear my face with it all and I rolled my sleeves up and went to work on my arms. This Vampire blood is great stuff! It coagulates and clings quite nicely. I hope it would come off.

Now, you would think that this would have made me stick out from the crowd, except that all of a sudden the square was inundated with Charity workers collecting for the RNIB and they were all wearing Halloween costumes. So there I was all covered in blood and surrounded by Draculas, Witches and Zombies. I fitted in quite nicely. 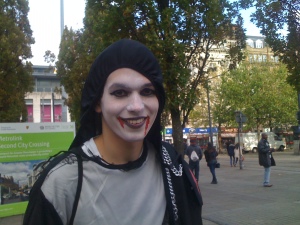 The Message was all about “Grace, faith and being redeemed by the blood.” Blood atonement has caused some controversy in British Evangelicism over the recent years. Even so, hide it though we try, it is the Core of the Gospel message. We have not been honest about the blood. Like I keep saying, put Leviticus and Hebrews together and there is all you need to know about your Salvation, its necessity and inner workings, all laid bare. It’s all about the blood and don’t you forget it.

All afternoon I had no real meaningful conversations save one with a young agnostic atheist from Wales. I nice young fella up in Manchester for business. Do pray for him, cause I tell you what, I think God was on his case. Smashing Geezer he was as well.

So anyways, our two hour parking time was up and it was back to the car. The two Greeting Card ladies were still sharking the pavement and one of the sales researchers asked me If I bought my wife a card in the last year. I said “No.”

“Oh” she replied, “You miserable bugger!”

I am pretty sure this is not how surveys should go, but me explaining that my wife didn’t really care for that stuff and we had better ways of communicating our love, wasn’t really believed. A man covered in fake blood is not to be trusted. And I was covered. My towel and cold water wasn’t washing much off. Even so, messages of love and sacrifice are always better delivered with personal and heartfelt lips and heart. This trumps mass produced cards any day of the week and is also the best way to spread the message of the everlasting Gospel.

On returning to the Pastors house, I rather than get the blood off, my attempt in his bathroom to remove the red, simply had it mostly smearing round my face. I was now a beetroot. Slightly lighter, but significantly red.

Pastor Shade had made a feat of Nigerian food. Rice, fried sliced Plantains, black peas, pot chicken and VERY hot and spicy fish. I was on fire! But it was lovelely.

We talked about church planting, church growth, sacrifice and again, I was blown away by their commitment to the vision God had given them. In they end, they pursued the heavenly vision, no matter what. I think this is THE THING. Do what God has revealed for you to do.

I eventually left them and got back to my hotel for around shortly after 5pm.

I hot bath got all the blood off and you know, I was bathing with Cowper, probably my favourite depressive.

There is a fountain filled with blood
Drawn from Immanuel’s veins;
And sinners, plunged beneath that flood,
Lose all their guilty stains.

The dying thief rejoiced to see
That fountain in his day;
And there may I, though vile as he,
Wash all my sins away.

Dear dying Lamb, Thy precious blood
Shall never lose its pow’r,
Till all the ransomed church of God
Be saved to sin no more.

E’er since by faith I saw the stream
Thy flowing wounds supply,
Redeeming love has been my theme,
And shall be till I die.

When this poor, lisping, stamm’ring tongue
Lies silent in the grave,
Then in a nobler, sweeter song,
I’ll sing Thy pow’r to save.

The Bible…..its a very BLOODY BOOK

My intention tonight was to sit in bed, eat Ritz Crackers and Peanut butter, do some journaling, ring Bridget and chill. I did and I was asleep by 10:00pm.

Hi there | we are in still in need of cash to finish this tour | We would love you to help | You can give ANY amount and you don’t need a paypal account either| Give right now and right here to: The Breakout Trust/66 Cities | Thanks in advance | DONATE

If You Want to see The First Twelve of Our 66 Minute Video Bible Check Here P.S. We need some more funding ti finish this project before Christmas so if you are up for it give me a call on 07975 805 323

Latest Press Releases That Google is Coming Up With

Why Not Make A Donation To This Valuable Ministry CLICK HERE